(Portland, OR) – Little Beast Brewing announced today the upcoming release of two mixed-culture beers fermented with wine grapes–Bière Gris and Radical Forces. Both beers are available in limited 375 mL bottles at the Little Beast Beer Garden in Southeast Portland, and with limited distribution in Oregon and California, beginning this Wednesday, February 20. Bière Gris will also be available on draft at the pub, while Radical Forces will remain a bottle-only release. 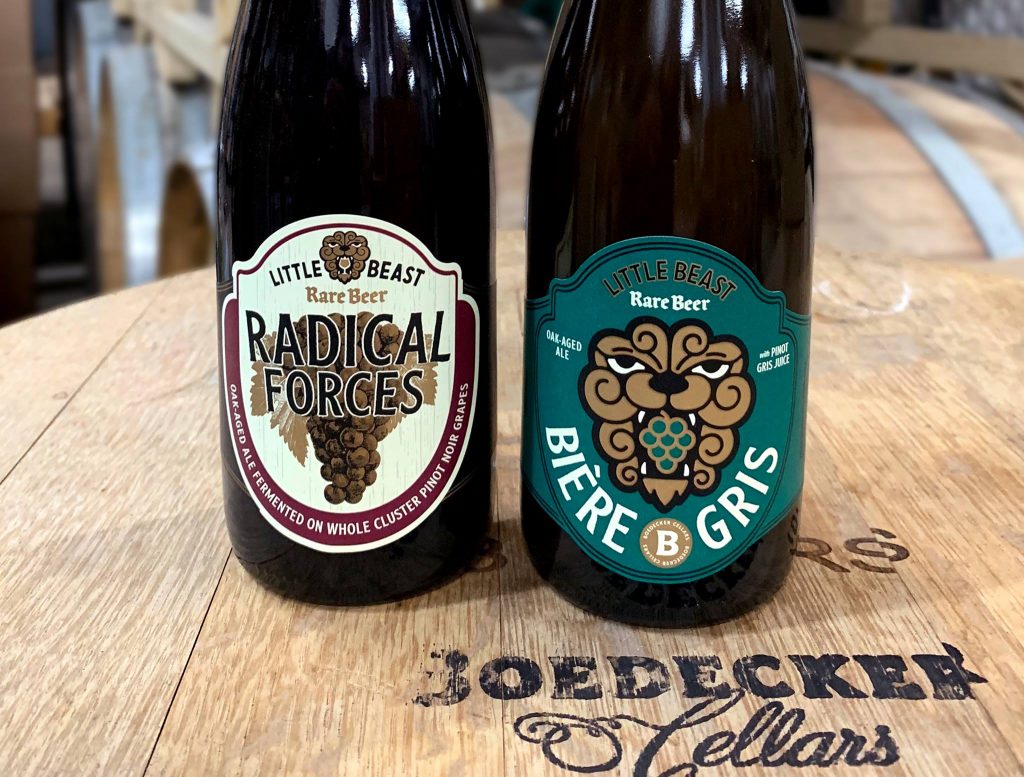 Bière Gris is a collaboration beer with Stewart Boedecker of Boedecker Cellars. Little Beast has aged beer in Boedecker wine barrels since they first started brewing, so when Boedecker visited the new brewing facility in Clackamas and sampled the brewery’s house lactobacillus culture, he proposed the idea of a collaboration. “We turned the art of wine and beer-making on its head a bit and the result is quite beautiful,” said Charles Porter, Little Beast Brewmaster and Co-Founder.

Porter and Boedecker began by inoculating Pinot Gris juice, from Finnigan Hill Vineyard, with lactobacillus–a process that is heralded in the making of tart and sour beers but typically avoided in winemaking. Once the fermented juice evolved it was blended into a base beer with a primary Saccharomyces fermentation. Brettanomyces was added for a secondary fermentation and the beer aged on oak where it developed for six months. The resulting beer has a soft vinous quality and pleasing floral aroma that parallels its delicate flavor and subtle tartness. The beer is 9.4% ABV.

Radical Forces is a 10.7% ABV adventuresome beer with a recipe that is rich in pilsner malt and loads of whole cluster Pinot Noir grapes from Finnigan Hill Vineyard in the Chehalem Mountains of Oregon. Diverse microflora and a six month stint on French oak have transformed this unique blend to express bright notes of cherry, plum, green peppercorn, along with a warm smack of spirits, baking spice and vanilla.

Both beers are available beginning at noon on Wednesday, February 20th at the Little Beast Beer Garden at 3412 SE Division St. in Portland. Also coming to the taproom this Friday are new draft selections, Wolf Camp Hoppy Saison and Country Wizard Brett Saison.