(San Diego, CA) – Coronado Brewing Company is debuting Leisure Lagoon Hazy Pale Ale, the latest in its hop-forward lineup of year-round releases. Named for an inlet in Mission Bay, Leisure Lagoon is the company’s first year-round hazy offering, following the success of its highly anticipated seasonal hazy, North Island IPA. “Our fans can’t get enough of hazy beers” says Shawn Steele, Director of Brewing Operations, Coronado Brewing Company. “We are excited to offer a lower ABV option that doesn’t skimp on any of the bright and juicy hop notes that people have come to expect with this style.” 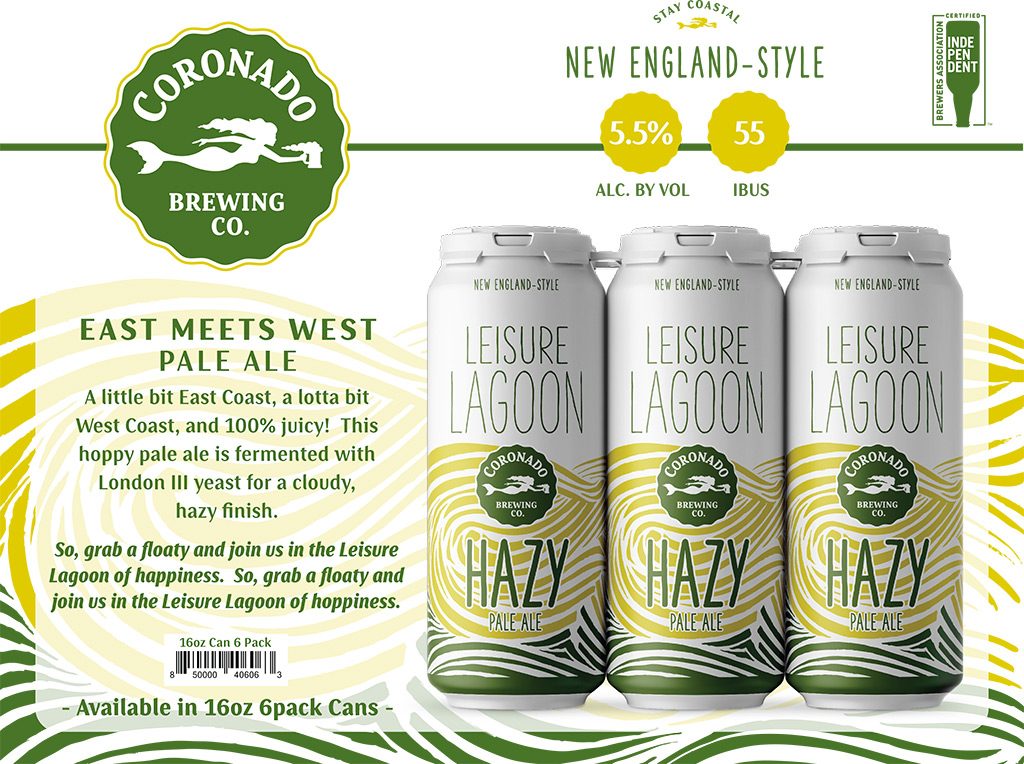 Leisure Lagoon Hazy Pale Ale is a unique spin on the hazy trend. It combines the best of East Coast and West Coast pale ales, using classic West coast hops, then fermenting with London III yeast for a softer mouthfeel and accentuated fruitiness. The end result is brighter and juicier than a typical west coast pale ale, with pleasant bitterness and easy-drinking ABV. “We spent a lot of time experimenting with different hop profiles and alcohol percentages,” says Steele. “At the end of the day, this is the beer that we all want to drink. It’s got the classic piney, dank, citrus hop character, with more fruitiness and softer mouthfeel from the yeast. We’re stoked with how it turned out and we think our fans will love it, too. It’s perfectly crushable.”

Leisure Lagoon Hazy Pale Ale will debut at Coronado Brewing’s three locations on Friday, February 15, in 16oz six-pack cans and on draft. The beer will hit broader retail availability later in February and will be available to buy in stores throughout Coronado’s distribution network. The company will also host an outdoor Leisure Lagoon Luau on Saturday, March 2, complete with luau-themed food, live music, and beer specials. For more information about Leisure Lagoon and the Luau, visit www.coronadobrewing.com. Stay Coastal. Cheers.

About Coronado Brewing Company
In 1996, when craft beer was still a foreign term and San Diego County was home to only a handful of breweries, the Chapman brothers Ron and Rick opened a brewpub in their hometown of Coronado. Today CBC stays true to their San Diego roots, brewing abundantly hoppy West Coast-style ales, which are available today in 14 US states and 12 countries. In addition to the long-established pub in Coronado, the company opened a tasting room inside its San Diego production facility in 2013, and a tasting room and restaurant in Imperial Beach, California in 2014. Coronado Brewing Company was honored in 2014 with one of the brewing industry’s most prestigious awards—World Beer Cup Champion Brewery and Brewmaster for a Mid-Size Brewing Company.